The commercial scale pilot is intended to demonstrate RF XL’s heating capabilities, alongside immediate and sustainable environmental, economic and social benefits. These include ~40% operating and capital cost reductions, no external water use requirements, near-zero GHG emissions through direct or indirect use of renewable power, a significant reduction in surface disturbance and no requirements for the addition of solvents.

Watch the unveiling of our RF XL clean tech inverter, jointly developed by Acceleware and GE, to be used in our Marwayne pilot test.

Join Heath and Ian as they visit the Alberta Energy Regulator (AER) Core Research Centre to view samples taken from the Marwayne asset.

Take a drive up to Marwayne with Acceleware's CEO Geoff Clark to see the test site and discuss our journey to get where we are today.

Sit in on a meeting with Scovan Engineering to discuss the design and plans for the equipment at our Marwayne Test Site. 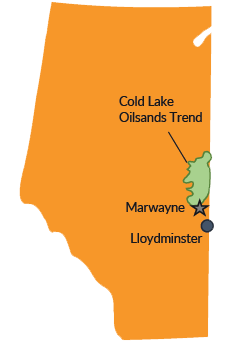 The Marwayne asset is currently held by private player, Broadview Energy, and is located ~50km Northwest of oilfield service hub, Lloydminster, within the Alberta Energy Regulator’s designated oil sands area. As operator of the pilot, Acceleware will be targeting the GP (General Petroleum) heavy oil zone within the Mannville Group by way of a farm-in agreement with Broadview Energy. The GP zone at Marwayne is analogous to most other heavy oil fields in Alberta and Saskatchewan (similar depth, geology, and reservoir characteristics) and bears many similarities to global heavy oil deposits such as those in California, Latin America, and the Middle East.

Pan Canadian initially tested slant well drilling at this location, with 64 wells drilled from 4 pads in the 1990s. Production reached over 2,000 bopd via CHOPS (Cold Heavy Oil Production with Sand) before shutting-in as a result of the 1999 oil price crash. Pan Canadian’s prior CHOPS activity provides Acceleware a high degree of geological delineation and reservoir characterization, allowing for optimization of well placement and operational strategies.

The objective of Acceleware’s Marwayne Commercial Pilot is to demonstrate the effectiveness of RF XL’s clean heating technology in a real-life heavy oil reservoir. As described in the Technology section of this website, the pilot will involve drilling one multilateral RF XL heating well and one production well into the GP heavy oil target zone. While the planned lateral length of the heating and production wells is 800m at the Marwayne Commercial Pilot, Acceleware has simulated effective heating for horizontal wells with lateral lengths ranging from 500m to 2000m.

With all pre-testing and design work complete, the RF XL converter at the surface of the Marwayne pilot site will deliver up to 2MW of power through the multilateral RF XL heating well and into the GP heavy oil target zone. Both the heating well and producer well will be equipped with downhole instrumentation allowing for the collection and analysis of real time pressure and temperature data along the lateral sections of the wells. The producer well will be completed with a high temperature PCP (progressive cavity pump) for the production and measurement of heavy oil that has been mobilized from the RF XL clean heating process.

Click on a company logo to reveal more information.

3P Technology is a Canadian, private, Advanced Remediation Service company focused on commercializing innovative waste treatment and processing solutions for industry. 3P performs treatability assessments and then designs and constructs and operates the processes for its clients.

Find out more about 3P Technology Corp at 3ptechnologycorp.com

Airbus is a global leader in aeronautics, space and related services. The company offers the most comprehensive range of passenger airliners from 100 to more than 600 seats. Airbus is also a European leader providing tanker, combat, transport and mission aircraft, as well as Europe’s number one space enterprise and the world’s second l argest space business. In helicopters, Airbus provides the most efficient civil and military rotorcraft solutions worldwide.

Find out more about Airbus at airbus.com

Find out more about AKITA Drilling, Ltd. at akita-drilling.com/

Broadview Energy (BVE) is a private oil and gas company focused on the development of thermal (SAGD) projects in West-Central Saskatchewan.

Find out more about Broadview Energy at broadviewenergy.ca

Find out more about Clear Rush Co. at clearrushco.com

Find out more about CMG at cmgl.ca

GE Global Research is GE's innovation engine where new ideas are originated, developed and productized to create a better world and deliver differentiated products across the company's industrial portfolio.

Find out more about GE Global Research at ge.com/research

Halliburton is one of the world's largest providers of products and services for the ever-evolving needs of the energy industry.

Find out more about Halliburton at halliburton.com

Find out more about Precise Downhole Solutions Ltd. at precisedhs.com

Find out more about QUBE at qubeiot.com/

Saa Dene is a collective group of companies with one clear vision: to increase Diversity and Inclusion through economic and social participation in the global economy.

Find out more about Saa Dene at saadene.com

Find out more about Scovan Engineering at scovan.ca

Find out more about Stream-Flo Industries Ltd. at streamflo.com

Tenaris is a leading supplier of tubes and related services for the world’s energy industry and certain other industrial applications. Our mission is to deliver value to our customers through product and process innovation, manufacturing excellence, supply chain integration, technical assistance and customer service, aiming to reduce risk and costs, increase flexibility and improve time-to-market.

Find out more at tenaris.com/en

Find out more about Tristar at tstar.ca

Find out more about Variperm Canada Limited at variperm.com

Weatherford is a leading wellbore and production solutions company, providing integrated solutions across well stages and customer domains to the oil and gas industry.

Find out more about Weatherford at weatherford.com

Acceleware has kicked off the drilling and completions program of the commercial-scale RF XL pilot project at Marwayne, Alberta.

Akita Drilling Ltd.’s Rig 29 moved onto the Marwayne site August 9, 2021. The RF XL producer well was spudded on August 12, 2021, followed by the heating well on August 13, 2021. Spud to completion of both the heating well and the producer well, barring unforeseen delays, is expected by late Q3. Facility installation will commence immediately thereafter, and RF XL heating starting shortly after final commissioning.