The state of tech innovation in the oil and gas sector: An interview with Acceleware CEO Geoff Clark

This article is part of a multi-part series that explores how innovation and technology are shaping the future of Canada’s oil and gas industry. The articles both stand on their own and also form part of a larger connected narrative that links important themes such as cleantech, collaboration, sustainability and economic development.

The first article of the series recounted the story of Acceleware, where entrepreneurs believe they have found the ‘holy grail’ of enhanced heavy oil and oilsands production. 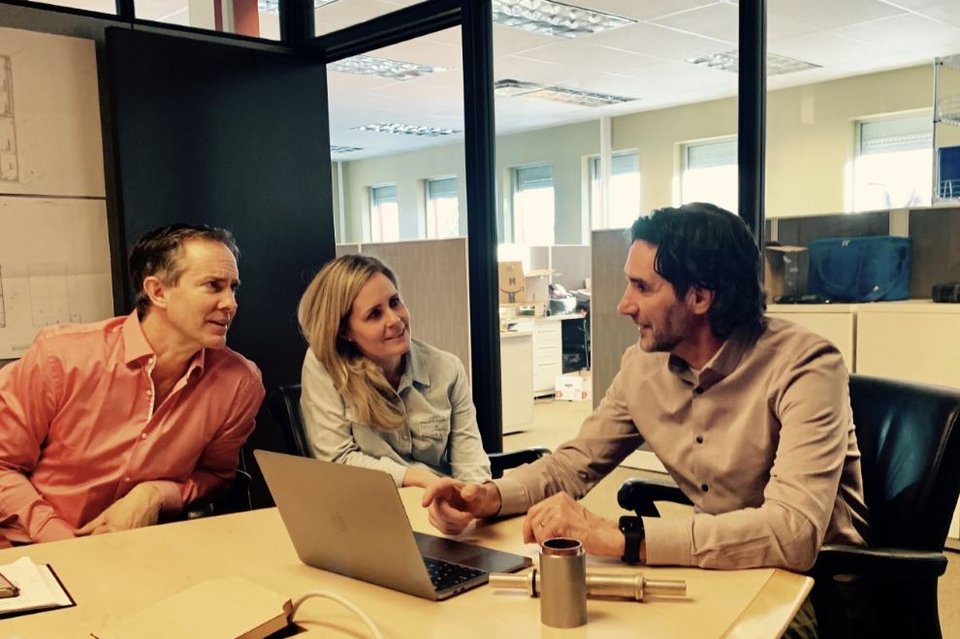 Given your time and experience in the energy and technology ecosystems, what sort of grade would you give the current state of affairs?

Geoff Clark: Honestly, I want to give the ecosystem a B, but the data would suggest a C or, in some cases, even a D. I recently read in the Logic that Canada leads OECD countries in firms that “say” they are innovating. However, it seems there is a big difference in “saying” you’re innovating and actually innovating. Other data suggests that Canada is falling behind. I am reminded of a chart from Daniel Munro of the Munk School at U of T. 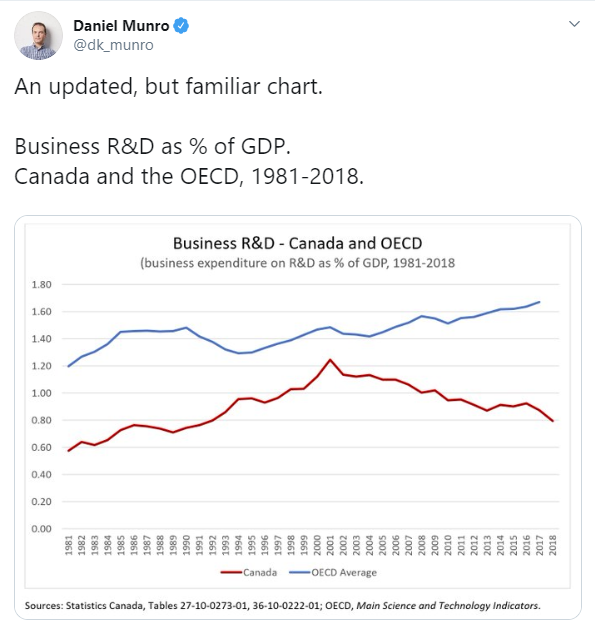 When it comes to energy firms (specifically those involved in fossil fuel R&D) over the past five years it’s even worse. See the below chart from Statscan: 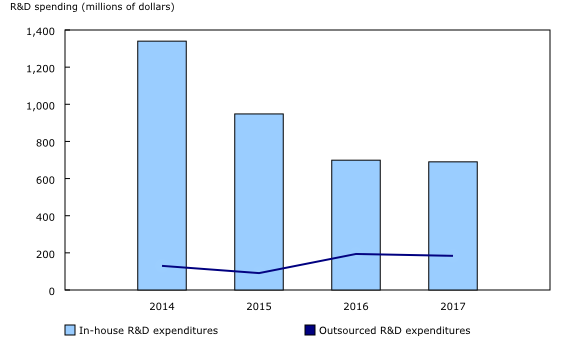 That’s not exactly a failing grade, but it’s not exactly a report card to display proudly to your parents! Let’s dig a little deeper into why you chose that particular mark. In terms of how you see our tech-scape at the moment, can you reflect on two things: First, do we have the right number of entrepreneurs with their shoulders to the wheel?

GC: I don’t think so, but I don’t blame them. There is not a lot of incentive for new entrepreneurs to develop transformative technology for the fossil fuel industry. That's unfortunate given the current challenges facing the industry and resulting opportunities for innovation. Not to mention the talent pool in Alberta — created and in many cases cast off by this industry. Everything suggests that the industry has a finite time horizon — 2030 or 2050. Although I don’t agree with that assessment (we will be using fossil fuels and mitigating that use for much longer), it sure limits the enthusiasm entrepreneurs can generate among stakeholders — employees and sources of capital in particular. Factor in that oil and gas producers’ production technology deployment timelines are measured in decades and their risk tolerance is pretty low. We are lucky that we started this 10 years ago. If I was getting into it today, it would be a tough sell.

And, second, do we have the right co-ordination and synchronization of the various groups which are active in thinking about and promoting next-generation technology innovation?

GC: We don’t. I mean the obvious groups are producers, producer-dominated industry associations, governments and the independent technology innovators. Often, I hear that these groups do not understand what the others want. Producers will say vendors are not listening to them, while innovators suggest producers are not thinking out-of-the-box enough. Once you get multiple producers together in an industry association, you pile on additional impediments to co-ordination such as competitive pressures and the sheer difficulty in finding common ground among a group of large companies. As an independent technology developer, I don’t feel these industry groups and associations are actively engaging us. That’s why we started a work-group to find ways to improve the pace of, and remove impediments to, the adoption of transformative technology for oil and gas.

Beyond “tech” groups not co-ordinating with each other, how much do you think the industry’s current state of financial weakness bears on what often seems like an aversion to even chatting about innovations that that be transformative — meaning in a much shorter time frame than perhaps we’re used to in industry.

GC: No question the industry is in tough here. We often hear that producers don’t want to invest in new technology because prices are low, or their product has no access to markets. I think it’s short-sighted. I remember a time we presented to a local investment bank in 2015 when we decided to go hard on our RF XL innovation. We went through the pitch, how we would transform the industry with lower capital cost, higher efficiency (lower operating costs) and how we have a path to zero GHGs. The response was a sarcastic “oh great, more oil.” As I mentioned earlier, the industry has drastically reduced its spending on R&D ­— when this happens it means the majority of that R&D is performed in-house, maybe with a little industry consortia spending. So, there is a built-in impediment in convincing organizations that a non-homegrown innovation is worth even talking about.

Thinking of other barriers, can you reflect on what happens in the C-Suite of major operators that creates a sense that our sector’s leaders don’t really embrace transformative change (even though they may openly “talk” about it.)

GC: On twitter, Elon Musk reminded me of a quote from Max Planck that in my cynical moments rings true today : "A new scientific truth does not triumph by convincing its opponents and making them see the light, but rather because its opponents eventually die, and a new generation grows up that is familiar with it." But I get it, the C-suite is getting the message on ESG (environmental, social, and governance), but those same messengers (the capital markets) also insist that producers return cash to shareholders through endless share buybacks and dividends. I think these companies can do it. I’m reminded of the situation years ago when this industry went through a similar revolution – the employee health and safety revolution. For years the C-suite talked about employee safety with it seemingly falling on deaf ears within the ranks. But something clicked and now the industry is 100% behind safety and recognizes it as a prerequisite for success. These companies need to spend some shareholder money on showing they can usher in a transition from high-carbon energy, to low-carbon energy eventually to no-carbon energy. I was happy to read in the Financial Post a quote from Suncor’s Mark Little: “When you start looking at the way technology is being embraced by our biggest trading competitor south of the border, the U.S., people are starting to feel pressure from companies coming in with better digital platforms, better customer experience and such, and so for us to compete, we need to accelerate the pace of our improvement and shift,” he continued. “This is as much self-reflection as anything. This is something we need to embrace as a country, as business leaders across the country. Are we doing enough?” Whether he is successful comes down to how quickly he can filter this message down the ranks.

I’ll bring it back to Elon and Tesla — as great as Teslas are, I’m not willing to count out the major automakers yet. I’d rather have an Audi e-tron than a Model X right now. The point being that even though Tesla is pretty disruptive, I don’t think it spells the end for traditional car makers. Companies also need to look beyond making billion-dollar investments incrementally better and embrace that there may be a better way to supply the fossil fuels that may be not only cleaner, but cheaper.

What’s your sense of our innovation ecosystem in terms of support for entrepreneurs (both new and experienced!) from organizations like Alberta Innovates? Is it sufficient? What guidance would you provide in terms of access or alignment?

GC: Generally, it’s good. I mean we have received $10 million in funding from the federal and provincial governments for our RF XL test. In the past we have received financial support from Alberta Innovates, and National Research Council’s Industrial Research Assistance Program. One thing that is often frustrating is that these organizations are often staffed with industry veterans in gatekeeper positions, or they co-opt industry directly as gatekeepers for innovations that receive support. So, to the extent the industry is resistant to transformative technology, or set in its ways, this can be problematic. I would like to see these organizations spend less time vetting technology (industry can do that when they are deciding to trial or purchase technology), and more time funding multiple transformative technologies that are being developed by capable management teams.

Do you think a better transformative technology narrative can help rebalance some of the external pressures the energy sector faces, say, from politicians and the public, who may not be aware of the important improvements technology can play in terms of environmental goals.

GC: This is a particular frustration for me. I don’t get why industry players don’t automatically think they will be rewarded for making small bets on transformative technology. Wouldn’t a major oilsands producer benefit if it told its shareholders and the public “We are investing in five potentially game-changing production technologies, each of which have economic benefits and get us on a path to low- or zero-carbon production. And if successful we commit to deploy that technology within five years.” I don’t see a downside even if they go 0 for 5, how does that failure stick to them? How are they going to get to net-zero by 2050 without transformative technology? Why not start now, and not be afraid of failure? I’m truly excited to read Mark Little’s comments from Suncor’s most recent earnings call. They are investing in new transformative technology — I hope others in the industry are doing the same. What I'd really like to see is a sense of pace or boldness around these actions — that, I believe, is what industry needs.

As we close, and based on what we’ve discussed above, what would your advice be to the “future you” — say in 2030 in terms of how best to think through and navigate the complexities?

GC: My future me is wildly successful — he doesn’t need my advice.